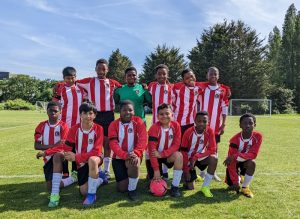 ST VINCENT’S CATHOLIC PRIMARY School and Eastbury Primary School served up a classic cup tie – in a thrilling Barking & Dagenham Post Trophy final – that see-sawed one way, and then the another, with nine goals, last-minute equalisers, extra-time winners and all manner of associated drama.

After just thirty seconds, the power and flair of the St Vincent’s team revealed itself for the first time as Owen Orhue danced down the left flank, carrying the ball from defence to the six-yard box, before slamming his shot into the side netting.

And when fellow district star Eghosa Ekhoseuhi did the same in the fifth minute, the sizeable St Vincent’s support erupted, believing the ball had burst through for an opening goal.

Jason Andrew meanwhile, mopped up everything at the back for St Vincent’s. A towering presence, time and again he broke up every Eastbury attack, before spreading play out wide for his dangerous wide-men to advance.

So, when – after nine minutes – Ekhosuehi let fly an unstoppable blast past the hands of keeper Hamood Muhammad, it looked like the game was only going to go one way.

However, Eastbury’s patient, passing style was beginning to gain the Barking school a foothold in the game. The quality of their play, and tirelessness of their running, slowly began to peck away at St Vincent’s, led by inspirational playmaker Nasim Keteb.

It was fitting then when, minutes after the opener, Keteb stole the ball on the edge of the box, before driving on and levelling up with a finish that his industry deserved.

The lead was quickly restored though as Festus Adomo embarked on a penetrating run down the right for St Vincent’s before firing a dangerous centre across goal. Keeper and forward collided, with both missing the ball, only for Nathan Oluwasokale to convert patiently from six yards.

Almost immediately, hesitation in the St Vincent’s box gifted another goal for Keteb and the game was all-square yet again.

Only sixteen breathless minutes had passed and four goals were on the board, with several chances for both sides almost adding to the tally.

A foul, thirty yards out, gave Ekhoseuhi a chance to restore the lead. This time though, Muhammad was set well, tipping the fiercely struck effort over the bar.

But, from the resulting corner, St Vincent’s took the lead for a third time when Lloyd Ackerson took a punt on a loose ball in the box, smashing an effort on goal that took a last second deflection to leave Muhammad helpless on the floor.

Eastbury almost levelled on the stroke of half-time when the tireless John Prempeh found Rayyan Khan in space, only for the ball the find the side netting.

Half-time offered little respite, with Ekhoseuhi rattling the bar within moments of the restart before having a twenty-five yard free-kick deflected over less than a minute later.

Whilst Ekhoseuhi continued to be the driving force for his side, the same could be said for Keteb, whose hard-work and perceptive passing caused an incessant threat to the opposition.

Three minutes into the half, he terrier-ed  possession, before chancing his arm with an attempt from distance that deflected out for a corner.

From the subsequent corner, Khan drilled the ball across goal, where Wojciech Blachowiak was on hand to sweep home first time, drawing level once again at 3-3.

Then, for the next twenty minutes, it was all one way. The battle between Ekhosuehi and Muhammad turned into the pivotal contest, with the latter pulling off save after save to keep his team in the contest. Five or six times, the Eastbury keeper pulled off unbelievable stops to deny to St Vincent’s forward as the tension built.

And then came what seemed like the moment the game had been building towards: with just five minutes remaining, Eastbury took the lead for the first time.

Again, Keteb was involved, winning a free-kick in a central position, thirty yards out from goal.

Khan stepped up to demand a last gasp save from Rich Kodua before a goalmouth scramble ensued as both teams vied for the loose ball. With desperate challenges flying in, Khan crept up unnoticed from taking the set-piece and made no mistake this time to fire his team in front.

Now it was a question as to whether Eastbury could hang on.

Ekhoseuhi’s twenty-yard screamer drew yet another diving stop from Muhammad, and two minutes from regular time, the same pair were at it again – with the same result.

It was almost put beyond doubt in the dying seconds of the game, when Keteb conjured another chance out of nothing before firing wide to be denied a well-deserved hat-trick.

Instead though, it was St Vincent’s who forced parity as Ekhoseuhi finally gained reward for his endless endeavours, bursting through to equalise sensationally with just ten seconds of added time remaining.

Extra-time was tough on Eastbury, who – with just one substitute – were beginning to feel the pace.

And so it was that St Vincent’s went on the front foot once again, with Orhue dancing past five challenges before Woody Carle’s sliding intervention kept it level.

Three minutes in though, and it was Orhue who settled it. From a St Vincent’s throw-in, the left-sided defender advanced upon goal before smashing his second and giving his side the slenderest of advantages.

Behind yet again, Eastbury refused to lie down: fighting to the end, Keteb went close on two more occasions in the final minute of extra-time, reflecting the pride and passion of his team.

But it was St Vincent’s who held on to win a maiden BDSFA title, and take the trophy back to school for the much-deserved accolades they no doubt received.