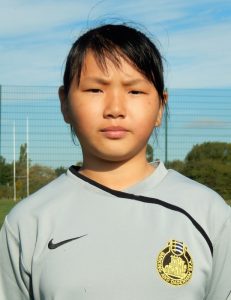 NEEDING A POINT FOR qualification from their London Girls’ League group, Barking & Dagenham had keeper Mei Wang to thank for her fourth penalty save of the season – ensuring the hosts clung on to the necessary clean sheet. In a wind-disrupted nail-biter, Barking & Dagenham twice struck the woodwork in the closing stages as they became the first team to reach this season’s LGL Super Six.

Early on, Kaltrina Ibrahimi’s ball over the top set Ellie Mai Morgan off and running, only for the skipper’s goal-bound effort to be comfortably saved.

And, on five minutes, Kayla Grain freed Miquellah Meade down the right wing, whose drive and strike then came close to opening the scoring.

Five minutes later, the outstanding Ibrahimi saw her dangerous corner headed clear, only for the rebound to fall straight back at her feet. An ambitious effort from a tight angle almost caught the keeper off-guard before the same player’s free-kick whistled just over a minute later. 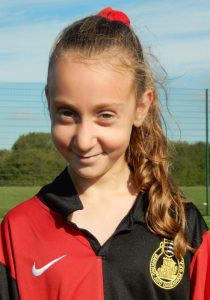 Lewisham striker Tory Facey remained the visitors’ main hope on the counter-attack and, when the powerful forward had her ankles tapped in the box, down she went to earn a clear spot-kick.

Wang held her nerve however, blocking the shot with her knees before Kirsten McNaughton was alert to mop up and clear.

As half-time approached, Grain’s run down the right flank opened up space, drawing across defenders and leaving three players unmarked in the box. As the cross came in, Meade got there first and beat the last defender, but fired straight into the arms of the grateful keeper.

With a gale howling throughout, a stop-start second half saw Barking & Dagenham create three great chances to break the deadlock.

First, Morgan held up the ball before laying off to Ibrahimi on the edge of the box. A heavy first touch looked to have taken the chance away but great improvisation from the William Ford winger saw her adjust her body to fire a right-footed effort that smashed against the upright. 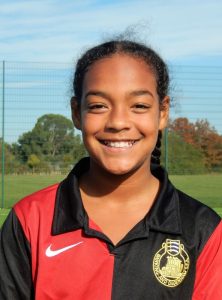 It was the opposite post that denied Morgan minutes later when Meade’s brilliant play down the right saw her beat three opponents before teeing up the captain. Under heavy pressure, she reached the ball first and managed to get a shot away, only to see the ball bounce out agonisingly for a goal-kick.

And then, with almost the last kick of the game, Grain saw a chance to lob the keeper from just outside the area: however, the wind played a part once more as the seemingly goal-bound shot dropped wide of target.

Despite the disappointment of not registering a win, Barking & Dagenham battled well against a well-organised and dangerous Lewisham side and deserved more than the score-line suggests. The visitors play Thurrock next weekend to see who will join the home side in the final medal competition.