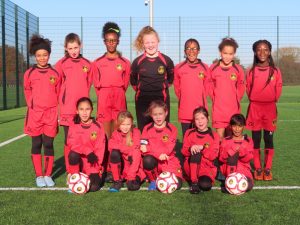 AFTER CLEAN SHEETS in their last two league matches, it was Barking & Dagenham’s turn to be denied a goal as hosts Hackney successfully defended a solitary first-half strike. Missed chances and the home side’s only attempt on target until the closing stages ultimately decided this Dave Agass Shield tie, putting Hackney through to the semi-finals at the visitors’ expense.

Throughout, Barking & Dagenham enjoyed the lion’s share of territory and possession but, in contrast to the six goals racked up against Thurrock the previous week, just couldn’t find the net.

Five minutes in, Violette Sharpe – a constant menace from start to finish – hustled an opening for Kara Mason-Wisbey, linking up from the left. Mason-Wisbey in turn sprinted clear, only to find the outside of the post under pressure from the ever-alert Hackney keeper.

And seven minutes later, the same player was denied once again when forcing an opening during a goalmouth scramble that was defiantly saved from close range. 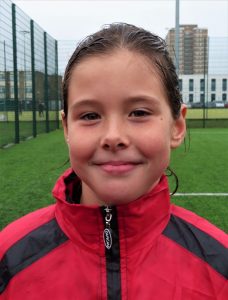 In between, Lily-Mae Elsey’s corner flashed across goal, finding no takers. Whilst Gracie Jones’s high-ball into the box from the right flank also evaded everyone when any significant touch would have taken it goal-bound.

Mason-Wisbey reciprocated Sharpe’s earlier creativity, this time slipping in the Gascoigne forward to sprint clear for a one-on-one of her own. Once again, the ensuing strike unerringly picked out the keeper – although it seemed only a matter of time before the pressure would eventually take its toll.

At the other end, Hackney threatened on the break. However, Arlinda Santo, Yasmine Moore and Ruby Abela dealt with any forays into Barking & Dagenham territory with keeper Connie McChrystal untroubled in the visitors’ goal.

A lapse of concentration on the stroke of half-time however settled the tie. Hackney were first to a loose ball in midfield and drove into the Barking & Dagenham area. Several chances to deal with the situation were spurned as the home side took advantage to force the ball in from close range against the run of play.

After the interval, Barking & Dagenham came out on the front foot determined to restore parity. Sharpe found space down the right before crossing into a dangerous area to pick out Mason-Wisbey. The William Bellamy playmaker’s first effort was blocked yet again by the keeper, with a second attempt on the rebound falling agonisingly wide of the target. 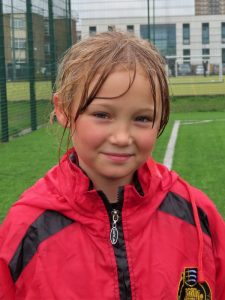 Two minutes later, Sharpe’s turn and spin saw her felled on the edge of the box. The resultant free-kick failed to find the target though as Hackney battened down the hatches and prepared for the Barking & Dagenham onslaught.

For all their pressure, the visitors struggled to create any clear-cut chances as the hosts made it as difficult as possible for Barking & Dagenham to carve the opening which they sought.

Eva Young found the target midway through the half, her shot from mid-range saved once again. And Sharpe’s alertness saw her swivel and strike from twenty-yards, her curling effort just evading the far corner with the keeper rooted to the spot.

With Barking & Dagenham committing more bodies forward, McChrystal was forced into action for the first time in the half, saving well from a rare Hackney break five minutes from time.

Meanwhile, the home side survived strong shouts for a penalty after a clear handball just around the edge of the box.

There was further hope in the final minute when Barking & Dagenham were awarded a free-kick twenty-five yards out. Abela’s goal-bound set-piece took a late deflection which could have taken it anywhere. Instead, it looped calmly into the arms of the grateful home keeper and the win was finally sealed.