BARKING & DAGENHAM U11S ENJOYED another successful trip to Jersey as they took part in the 44th ESFA Jersey Festival of Football, taking two teams for the first time in their history. 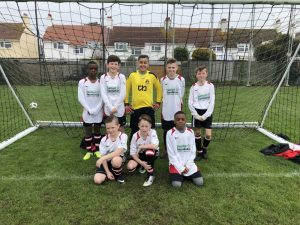 The B team open the Festival with a game against Gloucester B. The team fell behind early but responded well with a goal from Reece Jeffs.

Despite dominating the game, they went behind again but a brilliant late goal from Riley Setters saw them share the spoils.

The A team meanwhile took the lead right on the stroke of half time against Hackney courtesy of a Nathan Solomon header. However, a late second half showing saw Hackney score twice to take the win.

Better performances from both teams and a brace of wins were secured as the A team brushed Newbury aside with a convincing, all round team display. Somfechi Ukonu’s first half hat trick saw the game over before half time.

The B team secured their first win with a 4-2 victory over the hosts, Jersey. Amine Zafer’s brace led the way and goals from Ukonu and Aaron Balogun rounded off a great day for the association.

The next day saw a polar opposite day as both sides fell to emphatic defeats. The A team were torn apart by a rampant Plymouth side who were 5-0 up at the break. Ukonu’s early strike in the second half gave his side a glimmer of hope but it was merely scant consolation as the Devon side ran out comfortable winners.

The B team were unable to build in their win the day before as they crashed 5-1 to Orpington B. Jeff’s second goal of the week as the only positive as the Kent side eased to a convincing victory.

Day 4 saw Jeff’s grab his third goal of the festival to give the B team an early lead against St. Albans; a lead they held on until late in the second half. St. Albans equalised with a lucky goal and then pinched the win with a late strike to break Barking & Dagenham hearts. 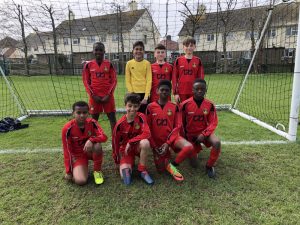 thriller against Orpington. Goals from Ukonu and Matas Klimas gave the side a 2-0 advantage at the break. Orpington halved the deficit early in the second half but Zafer restored the two goal lead before Orpington set up a grandstand finish with a second. Despite some scary moments, the A team held on for a memorable victory.

Day 5 saw the B team put up a spirited performance against a very good Gloucester A side who went 4-0 up within the first fifteen minutes. However, Barking & Dagenham refused to lie down and gave their opponents a scare with goals from Klimas and Aidon Shehu. Gloucester added a fifth as Barking & Dagenham pushed forward but Ukonu scored late to give the side some reward for a brave performance.

The A team secured their third win of the week with a comfortable 3-0 over St. Albans. Ukonu scored again before Jethro Medine curled a brilliant free kick into the top corner. Zafer rounded off the scoring in the second half with an exquisite chip from twenty-five yards.

Day 6 saw the effects of a long week catch up with both sides as they finished off with disappointing defeats. The A team took an early lead with Solomon’s solo effort but St. Albans A scored four quick goals to which Barking & Dagenham had no answer to.

Despite a brave second half performance, they were unable to get back into the game and had to settle for a fourth place finish. The B team, who were beset with injuries, had no answer to the power and pace of Jersey and went down 8-1. The team refused to give in and Frankie Ishmail’s first ever district goal was the only bright spot.

Despite the final day defeats, Barking & Dagenham could be proud of their efforts in what was a brilliant week. They received plaudits for their performances on the pitch and made memories that will last a lifetime.