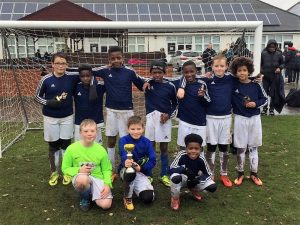 RODING CANNINGTON SCHOOL secured the first silverware of the BDSFA season after winning the Evans-Moore 7-a-side Cup. They held their nerve in a penalty shoot out to edge out Valence St. George’s in the final and win their first ever Evans-Moore title.

Roding had been impressive in the groups stages, winning all four of their Group D games. Victories over Rush Green (2-1), Valence B (1-0), Ripple (2-0) and Gascoigne (2-0) saw them secure top spot. They were joined in the quarter-finals by Valence B, who bounced back from their loss to Roding with impressive wins over Rush Green (3-1) and Ripple (2-0) to go through as runners up.

Group A saw Richard Alibon remain undefeated to top the group. Three wins and a draw were enough for Alibon to finish as group winners. The runners-up spot saw three teams separated by a single point but it was Parsloes who went through courtesy of a 1-0 win over Roding Hewett in their final game.

Group B was equally tight with four of the teams in with a chance of progressing going into the final group games. Valence St. George’s grabbed top spot with a 2-0 victory over George Carey whilst Beam took full advantage of George Carey’s loss to finish as runners up.

Group C was even closer with all five teams separated by a single point with just one game left. Thomas Arnold finished in first place. They were impressive in a 3-0 win in their opening game against Grafton and three draws were enough to see them through. Five Elms completed the knockout stages line up with a dramatic win over Grafton. A late penalty meant they went through at the expense of William Bellamy and Northbury, who had drawn all four of their games.

The knockout stages saw four exciting games with plenty of drama. Roding took an early lead in the game against Five Elms and, despite some late pressure, that was enough to see Roding through. They were joined in the last four by Valence Bonham. With the game heading towards the dreaded penalty shootout, a late strike sent the Bonham Road side through.

The third quarter-final saw Richard Alibon and Beam play out a thrilling 0-0 draw with both sides going close in normal time. Neither side could find a winner in extra time so penalties would be needed to see who would go through. It was Alibon who held their nerve in the shootout and a place in the semi finals. The final match of the round saw Valence St. George’s edge out Parsloes with a late strike.

That meant they faced up to Richard Alibon in the first semi-final and an early goal put Valence in front. Alibon tried to get back on level terms but a second strike from Valence made sure of the victory and a place in the final.

Roding and Valence Bonham contested the second semi-final and Roding struck the woodwork three times in the opening stages. Valence went close to upsetting the odds with a late effort but the game would go into extra time. Roding struck the woodwork again in extra time but, just as the threat of penalties were looming on the horizon, Roding scored to break Valence hearts and go through to the final.

The final saw the two best sides on the day challenge each other for the borough crown and the game started at a frantic pace. Both sides looked dangerous when going forward but neither could break the deadlock in normal time.

Extra time was a cagey affair with neither side looking like scoring and so the game went to penalties. Both sides scored their opening spot kicks and Roding went in front with a second successful penalty. Valence missed their next penalty which gave Roding the chance to win the title. A chance they duly took and with it the Borough title for the 1st time in their history.

The whole event, which saw 190 children taking part, was a success despite the wet weather and Roding will now go on to represent the borough in the forthcoming Essex Championships.