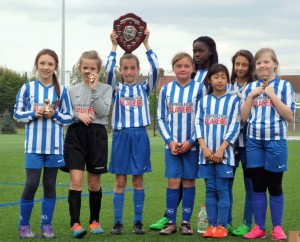 Following a fantastic football season so far, Valence girls’ football team retained the Monteagle Shield after a hard-fought game against Hunters Hall. Jessica Ellum’s extra-time opener had given Hunters Hall the lead with seven minutes remaining but skipper Millie Blythe set up Ruby Broadley to claw one back before grabbing one herself for the latest of last gasp winners.

During regulation time, the game remained tight with both teams limited in their chances to score. The second was much the same as Valence were reduced to peppering the surrounding fences with shots from distance and Hunters Hall struggled to find a way past pacey district star Alisha Johnson.

During extra-time though, Johnson tripped Ellum in the penalty area and the game exploded into life. Ellum was distraught to see her well-struck effort thunder back off the crossbar as the chance to seal the title out-right looked to have passed Hunters Hall by.

However, Ellum showed incredible tenacity moments later to break free inside the box, finally evading the attentions of Johnson, breaking through the challenge of keeper Hannah Embery, before poking in off-balance from an acute angle.

Shaken into urgency, Valence responded within a minute with a flowing, passing move from back to front which ended when Blythe played a slide-rule pass behind the otherwise resolute Hall backline for Broadley to steal in with a superbly taken first-time finish.

Then, with seconds remaining, Blythe herself powered into the Hunters Hall area, drawing the keeper off the line, before emphatically slamming into the bottom corner for the win.