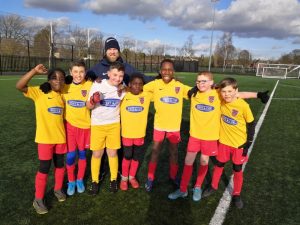 GRAFTON PRIMARY SCHOOL continued their remarkable season with victory in the National League Trust Cup. The reigning Borough 7-a-side champions, who are also county cup runners-up, held off the challenge of seven other National League clubs to be crowned regional champions at Boreham Wood F.C.

Playing under the guise of Dagenham & Redbridge, Grafton started off with a 1-0 win over Hemel Hempstead Town. Teddy Brown’s well-taken effort was the difference between the sides as they got off to the best possible start.

Brown was on the scoresheet agaim in game  two as they brushed aside Sutton United. Cordell Addo and Dennis Oppong were also on target as Grafton ran out 3-0 winners.

Barnet were next up and Grafton were indebted to Edwin Morina, who produced three top class saves to keep the scores level. Grafton upped their game in the second period and went in front when Lequane Grant fired home after a rapid counter attack. Barnet pushed bodies forward in search of an equaliser but Oppong’s lung-bursting run and neat finish saw Grafton maintain their 100% record.

Going into their last group game, Grafton knew if they avoided defeat against Woking then they would be through to the final.

However, there was no hint of they settling for a point as the Woking keeper denied Brown and Oppong. Woking, who needed a victory to keep alive their hopes of progress, threw bodies forward but couldn’t find their way past the impressive defensive partnership of George and Harry Dilworth and the 0-0 result saw Grafton through as group winners.

The host team, Boreham Wood, stood in Grafton’s way in the final and the it started off as a cagey affair. However, Grafton quickly grabbed control off the game and Oppong nearly gave his side the lead but his rasping drive went the wrong side of the post. Oppong was then denied by the Wood keeper before Grant fires wide from an acute angle. As full time approached, Oppong thought he had won the game but his bullet header flew agonisingly over the bar.

The first period of extra time passed without much action but with a minute left, and the lottery of penalties looming large, Grafton went in front. Oppong showed great strength and close control to fashion a chance for himself. He was thwarted at first by the Wood keeper but he settled himself to lift the ball calmly into the net.

Boreham Wood were stunned and Grant sealed the title moments later, squeezing the ball home from a tight angle. With time up, Wood finally managed to breach the Grafton goal but there was barely time to restart before Grafton were crowned champions.

The side will now go forward to represent the region in the Southern finals later in the year with the team dreaming of more glory to come.