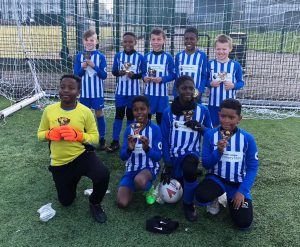 A FEAST OF FOOTBALL was enjoyed by all at Robert Clack Leisure Centre, as one-hundred and thirty pupils took part in the annual Evans–Moore Cup 7-a-side competition. Fourteen schools took part, with fifty-three matches contested over the course of the morning!

This year’s event proved to be the most closely contested and exciting for more than twenty years. It was a brilliant advert for schools’ football and many remarked on the fantastic atmosphere of sportsmanship and fair play that was clear for all to see.

Amazingly there were five penalty shootouts needed to decide the seven matches in the knockout stage. It also meant that the semi- final and the final places were always likely to bring surprises, joy and disappointment for the brave youngsters who volunteered to step up to the penalty spot

In the group stage, all teams played six matches. In Group One, it seemed that Richard Alibon was the team to watch, as they won four matches and drew two, finishing as clear winners of the group. Valence Bonham was second, with Grafton in third place. Ripple (eventual finalists) only scored one goal in the six matches, but they had a better defensive record than William Bellamy, who despite having the same number of points, were squeezed out of reaching the knockout stage on goal difference. Beam and Roding Hewett had played impressive football at times, but failed to amass the points needed to reach the quarter-finals.

George Carey School was the worthy winner in Group Two, beating every opposing team and scoring the most goals. Valence St George (last year’s winner) remained unbeaten and proceeded to the quarter-finals with St Joseph’s Barking and Roding Cannington. Five Elms, Godwin and Hunters Hall had provided worthy opposition for the top four in the group, but were unable to reach the next stage of the competition.

The knockout stages provided enthralling encounters with only four goals scored across the seven matches! It was somewhat bizarre that all four Group One teams (Grafton, Valence Bonham, Ripple and Richard Alibon) would now progress to the semi- finals. It was a real surprise that the impressive and unbeaten George Carey were kept at bay by Ripple. The match was decided by a penalty shootout which the latter won 1-0.

Both semi-finals were tense affairs. Richard Alibon and Valence Bonham scored a goal apiece and the match went to penalties. It was now the turn of Richard Alibon to succumb by a single penalty in the shootout (2-3.) Ripple and Grafton were evenly matched in the other semi-final and with no goals scored it was again a trip to the penalty spot! Three shots were scored by each team, but Ripple held their nerve to win by 4-3. 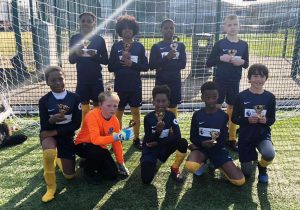 Valence Bonham and Ripple were in different ways worthy finalists. Valence had played well as a team and scored goals when it really mattered. Ripple had never given up, even when the odds were against them.

The final ended in a 0-0 stalemate after extra time, so the dreaded penalty shootout came into effect yet again. It was Valence Bonham that won 3-2 as one of the Ripple penalties narrowly missed the target and cruelly hit the post.

The silent tension of the penalty shootout was now replaced by cries of jubilation as Valence Bonham players now realised they were now the winners of the Evans Moore Cup!